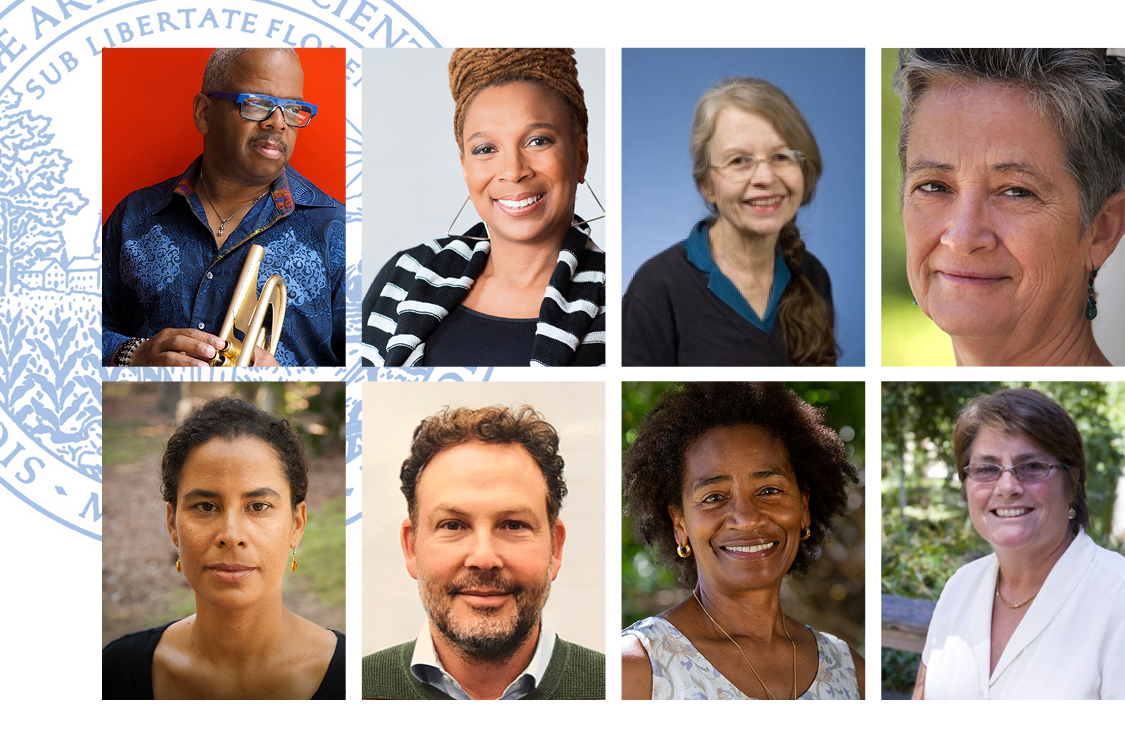 Eight faculty members were elected April 22 to the American Academy of Arts and Sciences, one of the nation’s most prestigious honorary societies. A total of 252 artists, scholars, scientists and leaders in the public, nonprofit and private sectors were elected to the academy today, including honorary members from 17 countries.

Terence Blanchard, a six-time Grammy-winning jazz trumpeter, composer and music educator, holds UCLA’s Kenny Burrell Chair in Jazz Studies in UCLA’s Herb Alpert School of Music. Blanchard has released 20 solo albums and composed more than 60 film scores. Blanchard served as artistic director of the Thelonious Monk Institute of Jazz (now named the Herbie Hancock Institute of Jazz) from 2000 to 2011. In this role, he presented masterclasses and worked with students in the areas of artistic development, arranging, composition and career counseling. Today, the institute partners with music school to offer the Herbie Hancock Institute of Jazz Performance at UCLA, a special college-level program that allows masters of jazz to pass on their expertise to the next generation of jazz musicians.

Kimberlé Crenshaw, a distinguished professor of law in the UCLA School of Law, is an expert on race and the law, structural racism and discrimination based on race, gender and class. A renowned scholar on civil rights and constitutional law, Crenshaw was a founder and has been a leader in the intellectual movement called critical race theory. She is the executive director of the African American Policy Forum, an innovative think tank connecting academics, activists and policy-makers to dismantle structural inequality and engage new ideas and perspectives to transform public discourse and policy. Crenshaw coined the term “intersectionality” more than 30 years ago to describe how race, class, gender, and other individual characteristics “intersect” with one another and overlap.

Barbara Geddes, professor emeritus and former chair of political science, conducts research on the breakdown of authoritarian regimes, democratization, authoritarian transitions and political development, with a focus on Latin American politics. Geddes’ early work included studies of bureaucratic reform and corruption in Brazil and the politics of economic policy-making in Latin America. Early conclusions from her research about regime duration and modes of transition were published in “What Do We Know about Democratization after Twenty Years, Annual Review of Political Science 2” (1999). Geddes also published a book on comparative political research methods called “Paradigms and Sand Castles: Theory Building and Research Design in Comparative Politics” (2003).

Elisabeth Le Guin, professor of musicology in the UCLA Herb Alpert School of Music, is a Baroque cellist, and was a founding member of Philharmonia Baroque Orchestra and the Artaria String Quartet. In recent years, Le Guin has become involved in the movimiento jaranero, a transnational grassroots musical activism in Mexico and Mexican immigrant communities in the United States. She has written two books, “Boccherini’s Body: an Essay in Carnal Musicology” (2006) and “The Tonadillo in Performance: Lyric Comedy in Enlightenment Spain” (2014), both published by UC Press. She received the American Musicological Society’s Alfred Einstein and Noah Greenberg Awards. She re-started UCLA´s Early Music Ensemble in 2009 after a 15-year hiatus.

Kelly Lytle Hernández, a professor of history and African American studies, is the director of UCLA’s Ralph J. Bunche Center for African American Studies. Lytle Hernández was awarded a 2020 MacArthur Fellowship from the John D. and Catherine T. MacArthur Foundation, which said her research on “the intersecting histories of race, mass incarceration, immigration, and cross-border politics is deepening our understanding of how imprisonment has been used as a mechanism for social control in the United States.” One of the nation’s leading experts on race, immigration and mass incarceration, she is the author of the award-winning books, “Migra! A History of the U.S. Border Patrol” (University of California Press, 2010), and “City of Inmates: Conquest, Rebellion, and the Rise of Human Caging in Los Angeles” (University of North Carolina Press, 2017). She holds UCLA’s Thomas E. Lifka Chair in History, and is the principal investigator for Million Dollar Hoods, a university-based, community-drive research project that maps the fiscal and human cost of mass incarceration in Los Angeles.

Daniel Posner, UCLA’s James S. Coleman Professor of International Development, focuses his political science research on ethnic politics, research design, distributive politics and the political economy of development in Africa. His most recent co-authored book, “Coethnicity: Diversity and the Dilemmas of Collective Action,” (Russell Sage, 2009) employs experimental games to probe the sources of poor public goods provision in ethnically diverse communities. His first book was “Institutions and Ethnic Politics in Africa.” (Cambridge, 2005). He is the co-founder of the Working Group in African Political Economy, a member of the Evidence in Governance and Politics network, a faculty associate of the Center for Effective Global Action and a research affiliate of the International Growth Center.

Marilyn Raphael, professor of geography and interim director of the UCLA Institute of the Environment and Sustainability, is the co-author of the award-winning book “The Encyclopedia of Weather and Climate Change: A Complete Visual Guide,” and the author or co-author of more than 60 peer-reviewed journal articles. Raphael was elected vice president of the American Association of Geographers, the world’s largest geography society effective July 1 of this year. Her research expertise includes atmospheric circulation dynamics, Antarctic sea ice variability and global climate change. She has been committed to introducing undergraduates to the world of climatology and graduate students to the joys of research.

Victoria Sork, is a distinguished professor of ecology and evolutionary biology and a renowned plant evolutionary biologist. Sork was award the 2020 Molecular Ecology Prize, which recognizes an outstanding scientist who has made significant contributions to the field. Elected in 2004 as a fellow of the American Association for the Advancement of Science, she has conducted pioneering research in the field of landscape genomics, which integrates genomics, evolutionary biology and conservation science. She is particularly concerned with the ecological and genetic processes that will determine whether California oaks will tolerate climate change. She and members of her laboratory conduct research throughout California and Western North America from Baja California through Alaska. Research she led in 2019 examines whether the trees being replanted in the wake of California’s fires will be able to survive a climate that is continuing to warm.

“We are honoring the excellence of these individuals, celebrating what they have achieved so far and imagining what they will continue to accomplish,” said David Oxtoby, president of the academy. “The past year has been replete with evidence of how things can get worse; this is an opportunity to illuminate the importance of art, ideas, knowledge and leadership that can make a better world.”

It also is an independent policy research center that undertakes studies of complex and emerging problems. Current academy members represent today’s innovative thinkers in many fields and professions, including more than 250 Nobel and Pulitzer Prize winners.