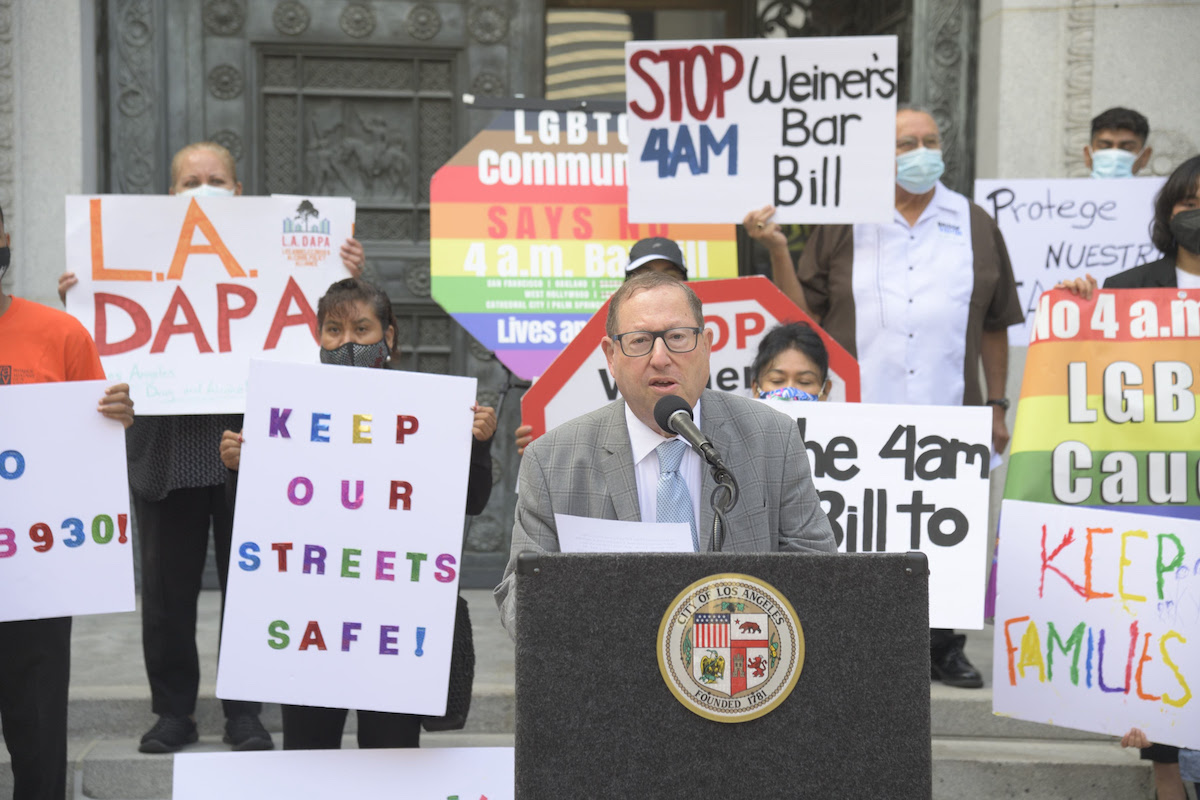 “The time is now for Californians to tell Sacramento we will not stand by and let the 4AM bar bill endanger the lives of our citizens,” Koretz says

“The LA City Council has spoken out against 4AM bar bills again and again and again, and I am here to tell you that we will not allow Sacramento to endanger our public safety, our lives, at any cost and we refuse to pay dearly for it without a fight,” Koretz said “I’m letting my colleagues know that we cannot get fatigued now and give up after years of fighting. This bill is built to be fast tracked and Jerry Brown isn’t there to stop it this time if it gets to the Governor’s desk. The time is now for Californians to tell Sacramento we will not stand by and let the 4AM bar bill endanger the lives of our citizens.”

Although the latest bill has eliminated Los Angeles from the legislation due to LA City Council resistance to the bill as led by Koretz, if passed Koretz’s office says it’s “estimated that it will cost the State at least $3-4 million per year to administer, mitigate the harm, and clean the blood off the highway while costing cities and towns in surrounding ‘Splash Zones’ millions more.

“It is estimated that the cost to LA City over the first five years could be as high as $1 billion, money that is needed to help address our homeless crisis,” Koretz’s office added.

In June, West Hollywood City Council voted 3 to 2 to take part in the program if approved by state lawmakers.

Also among the bill’s supporters is Ted Green, a West Hollywood resident who spoke at the meeting.

“I have reached a point in my life where frankly if the state law changes and the City Council adopts a local program, I am probably not going to take advantage of it. Maybe one night a year I will take a disco nap and rally, but more likely I am going to benefit from the increased tax revenue that will fund social services that I will take advantage of,” Green said.

Longtime West Hollywood resident David Mermelstein, however, at the meeting spoke in opposition to the idea of extending the last call to 4 a.m.

“I live right near Barney’s Beanery. For years we have had problems with drunks late at night. This just happened this past weekend. One of my neighbors came back from the bars with all his friends. Came back after 2 a.m., we didn’t get back to sleep until about five thanks to the rowdy-ness,” Mermelstein said. “I understand money for policing and community services are of course at a premium…who’s going to look after all these extra drunks?”

“We don’t need people from all over the rest of Los Angeles County coming here to get smashed,” Mermelstein added.

“We have gotten a lot of opposition on this from residents,” Shyne said during the meeting. “I think this hurts our residents who are trying to sleep and get good rest more than it helps. I don’t think the benefit to the businesses is enough to create this inconvenience.”

Councilmember John M. Erickson argued during the meeting, however, that supporting this bill does not mean supporting keeping bars open until 4 a.m., rather that it gives more local control to West Hollywood.

“This is the very essence of local control in my opinion,” Erickson said. “We are not opening bars until 4 a.m., it’s just saying that if this passes we have that authority to do. “