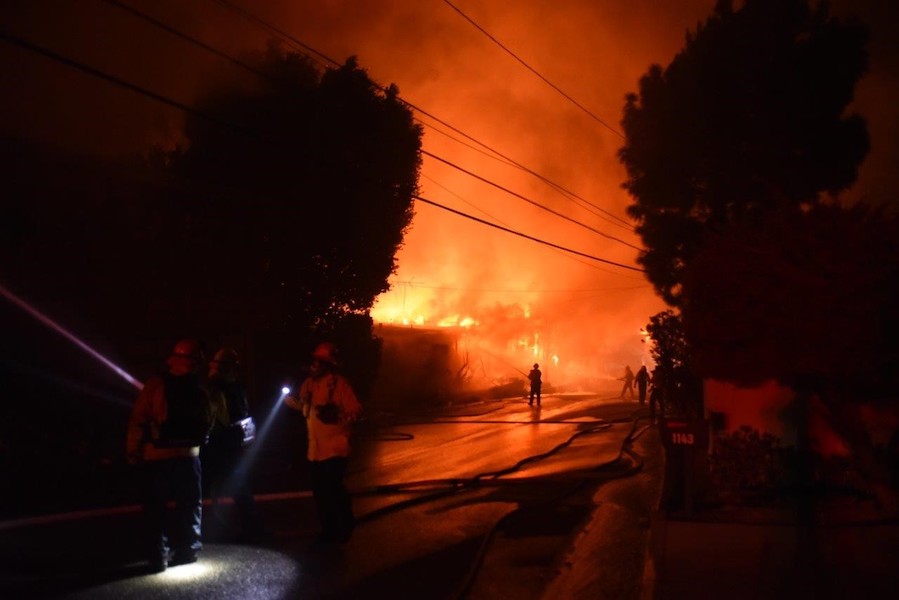 Firefighters continue to battle through Santa Ana winds combatting the Getty Fire, which as of 3:30 p.m. Wednesday is at 27 percent containment, and while mandatory evacuation orders remain in place for much of Pacific Palisades and Brentwood, authorities are letting some residents temporarily revisit their homes to retrieve pets and medication.

In order to be escorted, residents must show valid identification with proof of residency and have a need to obtain medication. There is a time restriction of 5-10 minutes for residents to gather their medications, says the LAPD, but added that officers cannot force residents out if they decide to remain longer but should encourage and seek cooperation if residents attempt to do so.

The fire, which broke out in the Sepulveda Pass near the Getty Center around 1:30 a.m. Monday, has burned 745 acres and is at 27 percent containment as of 9:00 a.m. Wednesday. According to the Los Angeles Fire Department (LAFD), 12 structures have been destroyed and 5 have been damaged as 7,091 residential buildings are threatened by the blaze. The Getty Center has not been damaged by the blaze.

In a press conference Tuesday evening, Los Angeles Mayor Eric Garcetti and the LAFD announced that the fire was sparked by a tree branch falling on a powerline.

“The fire was deemed an accidental start, caused by a tree branch that broke off and subsequently landed in nearby powerlines during high wind conditions. This errant tree branch caused the sparking and arcing of the powerlines, igniting nearby brush. All powerlines on the pole remained intact,” said LAFD Spokesperson Brian Humphrey.

Overnight, crews and aircraft worked to contain wind-driven spot fires and flare-ups within the current fire perimeter as an Extreme Red Flag Warning remains in place.

“Adverse weather conditions will be the biggest challenge for firefighters today. An Extreme Red Flag Warning remains in effect throughout the day today and into tomorrow. Winds are forecasted to be 30-50 mph with peak wind gusts up to 70 mph. Relative humidity is forecasted to drop into single digits with poor to no overnight recoveries. This all adds up to an extreme fire weather threat, meaning that conditions are as dangerous for fire growth and behavior as we have seen in recent years,” Humphrey said.

Due to the extreme Santa Ana wind event, the LAFD has recalled and staffed additional resources for any emergency that may arise. These resources will be strategically placed in key locations that have a history of being prone to wildfire.

An evacuation preparedness (yellow) zone remains in place, and now includes Mountaingate, within the following borders:

All lanes of the 405 Freeway are open but some on/off ramps may be closed intermittently from 101 to Sunset. In addition, Temescal Canyon Road northbound is closed at Sunset Boulevard, northbound Sepulveda Boulevard is closed from Moraga Drive to Skirball Center Drive and southbound Sepulveda Boulevard is closed from Skirball to Sunset. For real-time information freeway status, visit the Caltrans QuickMap. City of Los Angeles Street closures can ben seen below.

763 personnel are fighting the fire across a range of cooperating agencies, including 123 engines and 14 hand crews.

The following Los Angeles public schools remain closed on Wednesday due to the Getty Fire.