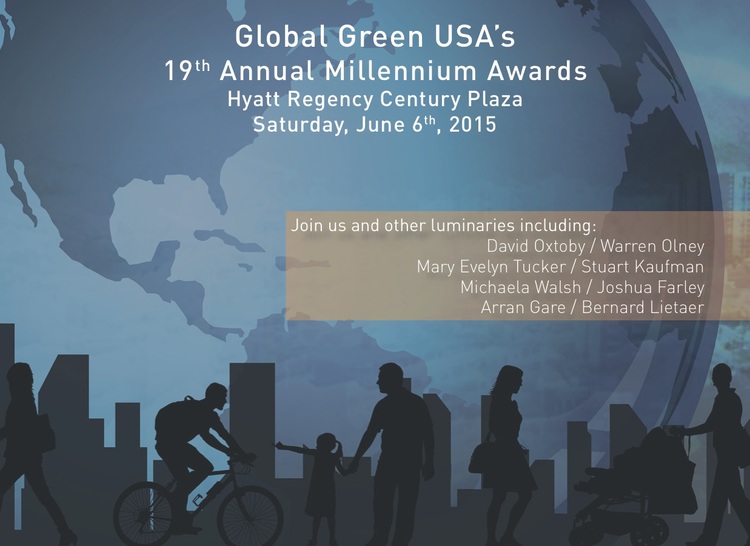 The Millennium Awards were established in 1996 to recognize and herald those whose lives and livelihood embody Global Green USA’s mission of “fostering a global value shift toward a sustainable and secure future.”

The Awards were designed to honor individuals, companies and organizations who recognize the connection between humankind and nature, to celebrate their success and inspire others to make such exceptional behavior the norm.

A successful corporate leader who is moving their company from “business as usual” toward a “restorative enterprise.” This individual’s and company’s commitment to resource efficiency, social responsibility and sustainability pervades throughout their company and personal life. This person encourages and inspires chieftains in industry and others to join in pioneering the processes of sustainable development.

Individual or organization that has demonstrated international leadership to protect the environment and create a value shift toward a sustainable, secure future. Through their use of collaboration and partnership, they shine a light on environmental challenges and conflicts while providing innovative solutions and initiatives.

Individual or organization that has demonstrated environmental leadership in California public policy through innovative legislation, regulations, or initiatives that encourage sustainability.

Organization, development, or structure that showcases true advancement in green building practices, including such elements as LEED certification, cradle to cradle material usage, transit and site planning, and land use.

Inaugurated in 2006, the Millennium Award for Community Environmental Leadership honors individuals or organizations that have cultivated and led communities to create extraordinary collective environmental achievements.

This award recognizes those who embody the mission of the Green Cross to “foster a global value shift toward the environment”; whose actions reflect the spirit of President Gorbachev’s leadership and vision; and whose dedication has played a significant role in the founding of Green Cross International and Global Green USA.