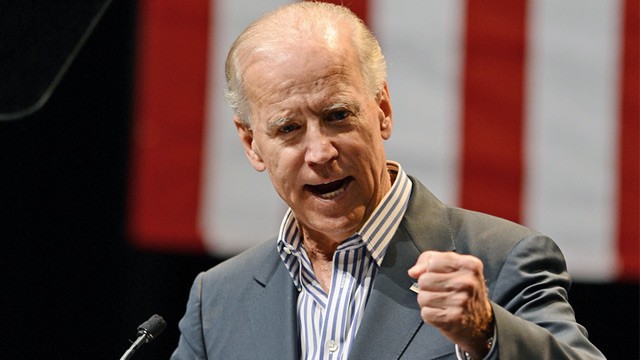 Vice President Joe Biden — and the traffic headaches that come with him — will be in Los Angeles today to attend the star- studded televised fundraiser “Stand Up To Cancer,” a program of the Entertainment Industry Foundation.

“The vice president will share his personal connection to cancer through his son Beau,” according to Biden’s office. “Emphasizing that we’re at an inflection point in the treatment and prevention of cancer, he’ll urge Americans to volunteer their time and energy to fighting cancer through volunteer opportunities on cancer.serve.gov.”     Actors Emma Stone, Matthew McConaughey, Bradley Cooper and Anna Kendrick are among the guests expected to join Biden at the event — held at Walt Disney Concert Hall in downtown Los Angeles.

It will air on more than 60 broadcast and cable networks and streaming channels in the United States and Canada.

The hour-long show, which tapes at 5 p.m., will be shown commercial-free on Southland ABC, CBS, Fox and NBC affiliates beginning at 8 p.m.

For the first time, there will be a Spanish version of the telecast shown nationally

The telecast will feature musical performances by recording artists Celine Dion and Dierks Bentley, who will be joined by Keith Urban and Little Big Town.

Thanks to Biden’s motorcade, motorists could run into some traffic headaches between downtown and Los Angeles International Airport. According to the Los Angeles Police Department, motorists should try to avoid the following areas:

— the area around Pershing Drive between Westchester Parkway and Imperial Highway from 3:45 to 4:30 p.m.;

— the area around Imperial Highway between Vista Del Mar and California Street from 4:30 to 4:45 p.m.;

— the area around the eastbound Glenn Anderson (105) Freeway between California Street and South Broadway from 4:45 to 5 p.m.;

— the area around South Figueroa Street between West Fifth Street and West Temple Street from 5 to 5:15 p.m.;

— the area around First Street between South Beaudry Avenue and South Olive Street from 5:15 to 5:30 p.m.;

— the area around Hope Street between West Temple Street and West Third Street from 5:30 to 5:45 p.m.;

— the area around South Figueroa Street and West Fifth Street from 6 to 7 p.m.;

— the area around South Hope Street between Second Street and Fifth Street from 6 to 7 p.m.;

— the area around Grand Avenue between Third Street and Seventh Street from 6 to 7 p.m.;

— the area around Grand Avenue between Olive Street and Figueroa Street from 6 to 7 p.m.;

— the area around the westbound Glenn Anderson (105) Freeway between South Broadway and California Street from 6:30 to 7 p.m.;

— the area around Imperial Highway between California Street and Vista Del Mar from 6:30 to 7 p.m.; and

— the area around Pershing Drive between Imperial Highway & Westchester Parkway from 6:30 to 7 p.m.

The following closures/restrictions will be in effect in downtown Los Angeles, all from 1 to 6:30 p.m., but no bus routes will be impacted:

— north- and southbound Hope Street between First Street and Second Street; and