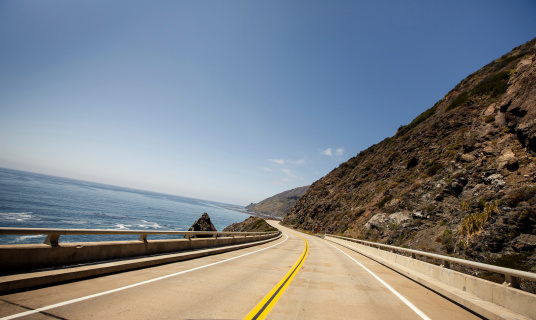 A motorcyclist who was killed and his passenger who suffered major injuries when their bike collided with a Volkswagen Jetta on Pacific Coast Highway in Malibu was identified Sunday by the California Highway Patrol.

The motorcyclist was identified as William J. O’Hara, 36 of Los Angeles, and his passenger was Stephanie Feng, 28, also of L.A., the CHP reported.

The crash happened about 3:35 p.m. Saturday on PCH at Leo Carrillo Beach Road, according to Dispatch Supervisor Bernard Peters of the Los Angeles County Fire Department.

A Jetta driven by 22-year-old Jessie Gudino of L.A. entered PCH from the Leo Carillo campground and then attempted a U-turn to change directions from northbound to southbound on PCH, according to the CHP.

In trying to make the U-turn, Gudino drove into the path of O’Hara’s motorcycle which was heading eastbound at an undisclosed speed. Photos from the scene indicated that the motorcycle was coming down a hill and around a curve, towards the Mulholland Highway intersection.

Gudino’s car then clipped the back of O’Hara’s bike. The impact of the crash caused O’Hara and his passenger, Feng, to be ejected from the bike.

O’Hara was pronounced dead at the scene and Feng was taken to UCLA Medical Center by helicopter, according to fire dispatch supervisor Ed Pickett. The CHP said the motorcycle was a 2004 Yamaha R6.

Gudino and his female passenger, 21-year-old Abeli Mazon of Los Angeles were apparently not injured in the crash, according to the CHP.

Gudino was not arrested. It was not immediately known if he was cited.

The investigation shut down the center three lanes of the five-lane PCH until about 8:45 p.m. Saturday.