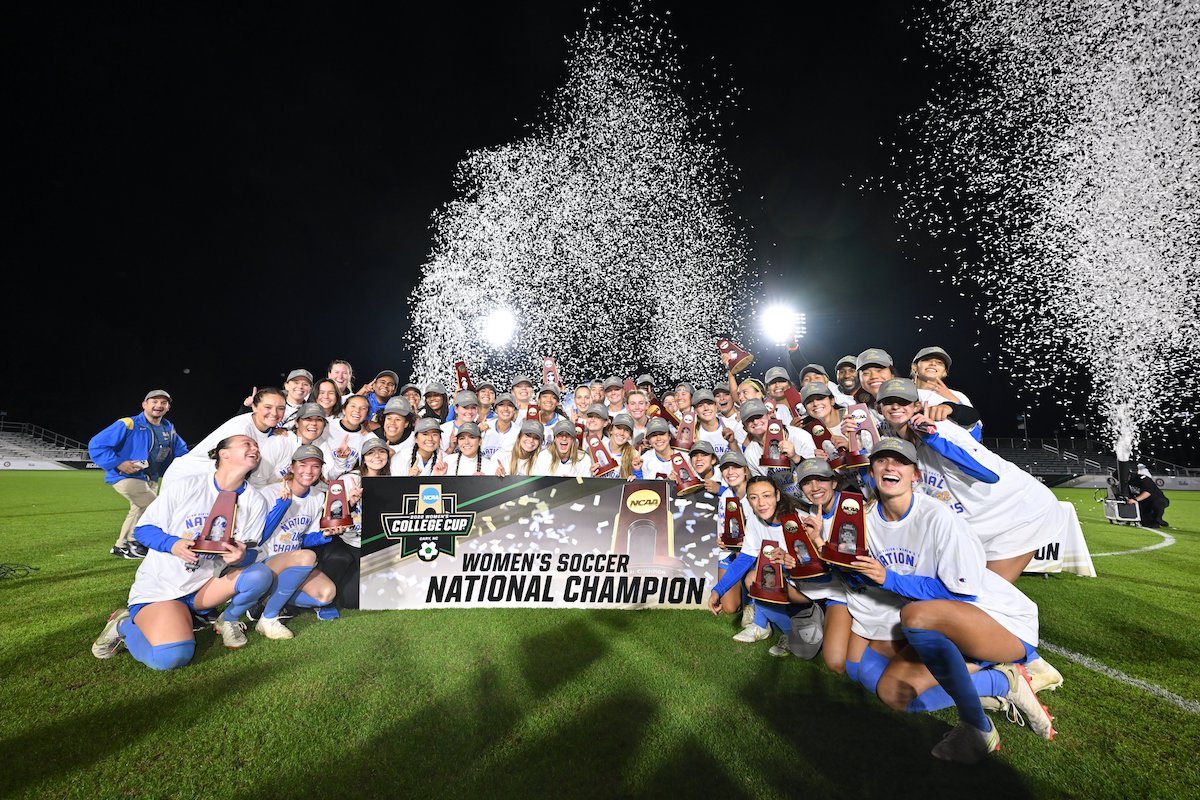 The No. 1-seeded UCLA women’s soccer team earned the second National Championship in program history, and No. 120 in UCLA school history, after defeating No. 2-seeded North Carolina by a score of 3-2 in double overtime on Monday evening at WakeMed Soccer Park.

The Bruins (22-2-1) trailed 2-0 through 80 minutes of regulation, but scored twice in the final 10 minutes to force overtime. Graduate midfielder Maricarmen Reyes then scored the go-ahead, and ultimately game-winning, goal in the 107th minute off a rebound of an Ally Cook shot.

With the result, UCLA became the first team in College Cup history to come back from two goals down to record a win in the title game. UCLA’s Margueritte Aozasa became the first coach in NCAA women’s soccer history to win a National Championship in their first year as a head coach, and also became just the fourth female head coach and second Asian American head coach to win a title.

“That was incredible, I can’t say enough about the belief this team has and the care they have for each other,” said Aozasa. “The rollercoaster of emotion I think we all felt, I cried many times during that game – happy and sad. We’ve said from the beginning of these playoffs that our care and love for each other and love for this program was going to be what was going to carry us through, and you saw that tonight. To be down 2-0 with 10 minutes left, to be down a goal with less than a minute left, and to come back and then not even go to PKs but win in overtime, is something incredibly special and it speaks to the character of the entire team.”

The score from Reyes capped off a furious comeback for UCLA, which dominated the final 30 minutes of the contest.

The goal-scoring sequence was initiated with a long period of possession in the offensive third, and kicked into high gear when sophomore left back Quincy McMahon whipped in a cross from the left side for Cook. With her back to goal, Cook was able to turn and put in a right-footed shot. UNC keeper Emmie Allen dove and got her left hand on the shot, but it trickled towards the right post where Reyes sprinted and put away the sharp-angle rebound.

UCLA made Reyes’s overtime heroics possible with a pair of gritty set piece goals in the final 10 minutes of the game.

Sophomore forward Lexi Wright was the first to find the back of the net, getting the Bruins on the board in the 80th. That play got started with a long free kick into the box, which was initially headed out by a UNC defender but came to senior forward Sunshine Fontes above the box. Fontes drilled a first-time shot off the loose ball from the penalty arc, and she put enough on it that Allen wasn’t able to close her mitts on it, allowing Wright to volley in the rebound before it hit the ground.

The Bruins went on to score with just 16 seconds remaining to send the game into overtime. That play came off a corner, with freshman midfielder Ally Lemos finding junior forward Reilyn Turner at the back post for her 11th goal of the year.

Avery Patterson scored two goals in the second half for North Carolina (20-5-1), both off far-post headers. She opened the game’s scoring in the 59th minute, meeting an Emily Moxley cross at the top of the six and redirecting it inside the far post. She doubled the Tar Heels’ lead in the 75th minute, receiving a cross at the far post but looping a header back across goal and into the side netting.

The Bruins had several dangerous scoring chances that didn’t result in goals, in both the second half and overtime periods. Most notably, Turner had a header cleared off the line about 60 seconds before Reyes’s goal. The shot required a VAR review.

Wright also had a pair of great looks in the latter part of the game. In the 65th, she had a loose ball come to her inside the 18 off a corner, but she couldn’t corral the bouncing ball in time to get a shot off. She also had UCLA’s best chance of the first overtime session, putting in a low shot from about 25 yards out that was pushed just wide by Allen.

Graduate goalkeeper Lauren Brzykcy made five saves for UCLA. Arguably her best save came in the 73rd, as she had to stop a diving left-footed shot from UNC’s Talia Dellaperuta.